Borderlands 3 Basics: 9 Tips to Get You Started 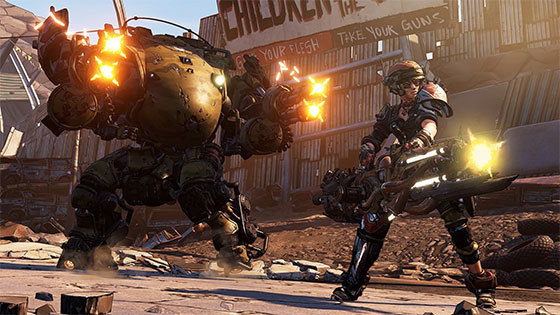 Borderlands 3 Basics: 9 Tips to Get You Started

Borderlands 3 is so close, you can practically taste the unbridled mayhem in the air. Perhaps you’ve already chosen your main Vault Hunter and mapped out your planned skill tree builds for Amara the Siren, FL4K the Beastmaster, Moze the Gunner, and Zane the Operative. You know exactly when you’ll be able to start your galactic adventure at launch thanks to the Borderlands 3 release schedule. But there are a few things you might not know about Borderlands 3 that will help you enjoy yourself that much more. Here are nine spoiler-free starter tips to help you be the best Vault Hunter you can be. 1. Equip a variety of weapons to avoid running out of ammo
There are over a billion guns in Borderlands 3, but only six types of ammo: Pistol, Assault, SMG, Shotgun, Sniper, and Heavy. To ensure that you don’t chew through your ammo stocks and come up empty at the worst possible moment, always bring a variety of weapons into battle. For instance, even if you have two pistols you particularly love, it’s better to pick one and store the other in your Backpack than risk equipping two weapons that’ll run dry at the same time. As you continue to level up, be sure to visit Marcus aboard Sanctuary III and buy some of his Storage Deck Upgrades (SDUs) to expand your carrying capacity. 3. Choosing the correct elemental damage type during combat makes a big difference
Depending on what type of enemy you’re up against, your choice of elemental weapons can be the difference between tearing your target to shreds or barely making a dent. There are five elemental damage types in Borderlands 3: Incendiary, Shock, Corrosive, Cryo, and Radiation. The first three types are most effective when matched to an enemy’s color-coded health bar: Incendiary damage tears through Flesh represented by red health bars, Shock decimates Shields shown as blue health bars, and Corrosive will melt through Armor denoted by yellow health bars. All elemental damage with the exception of Cryo will also deal respectable damage-over-time.

Cryo and Radiation weapons aren’t designed to take down specific enemy types, but they’re still highly useful for their utility. The icy blasts of Cryo guns will slow their targets, eventually freezing them solid; this is particularly handy when you need to isolate an enemy for some focused fire or keep a melee attacker at bay. Radiation can cause your target to become Irradiated, creating a noxious damage-over-time cloud that also affects nearby enemies. It can quickly nuke big groups if you successfully cause an Irradiated chain reaction: when an Irradiated enemy dies they’ll explode for immediate area-of-effect damage and a chance to Irradiate any nearby baddies.

4. Equip Class Mods for more skill choices
Class Mods are class-specific pieces of gear that grant a variety of bonuses when equipped. Typically these bonuses come in the form of points on skill trees, which can afford you access to abilities and buffs that you haven’t actually invested points into, or put you over the usual cap for skills that you’ve already maxed out. Note that it’s only possible to equip Class Mods after you complete a specific mission on Promethea, so if you find any before then, you should store them for safekeeping in your Player Bank found in Sanctuary III’s Crew Quarters. 5. Be sure to reposition yourself during Fight For Your Life
Successfully scoring a kill during the downed Fight For Your Life state will bring you back from the brink of death, but you may sometimes find yourself stuck in a bad spot during FFYL without a clear line of sight to fire at nearby enemies. In Borderlands 3, all Vault Hunters can now crawl around during FFYL, giving you a better chance of lining up the perfect shot that ultimately saves your life with a Second Wind recovery. Friendly NPCs are also able to revive you, so crawl towards any who are nearby to increase your odds of survival.

6. Use the new Mark Target action to express yourself
Whether you’re playing with friends who all have voice chat enabled or teaming up with randoms in multiplayer matchmaking, communication is key for co-op success. The new Mark Target command in Borderlands 3 is the perfect way to call out points of interest in co-op, as it instantly highlights your target with a relevant icon. Mark Target is particularly helpful when you want to rally your group against a tough enemy, helpfully highlight an ammo crate, call dibs on a loot chest, or just temporarily mark an interesting spot in your environment.

7. Vehicles you encounter are yours for the taking
You’re always free to explore Borderlands 3 on foot, but grabbing a set of wheels is a quicker way to reach quest objectives or new points of interest. You can always digistruct a vehicle at any Catch-A-Ride station, but there’s also the option of a quick hijacking if aggressive bandit drivers get too close. There are even some elusive vehicles tucked away on certain planets, which appear as purple models on your minimap; if you can reach these custom vehicles and successfully drive them to a Catch-A-Ride in one piece, Ellie will reverse-engineer their modifications for use in your own car collection. If you ever need to make a quick getaway or want to hit some sick air off a makeshift ramp, make sure to hit the boosters, which by default are mapped to Left Bumper/L1 on controllers and Left Shift on keyboards. 8. Check your mail for weapon manufacturers’ loyalty rewards
The weapons manufacturers of the Borderlands universe are all eager for your business, and they like to keep tabs on your accomplishments in Borderlands 3. When you hit certain milestones using a manufacturer’s gear, there’s a good chance they’ll reward your brand loyalty with a little thank-you gift sent via the in-game mail system. To receive your reward, go to the Social section of the pause menu, then click the Mail tab to peruse your complementary goodies. The in-game mail system is also how you’ll receive any weapons you’ve earned via the Vault Insider Program.

9. Mayhem Mode continues the challenge after you beat the campaign
On your space-faring quest to stop the twisted Calypso Twins, you’ll encounter tons of optional side missions offering extra XP, helpful loot, and self-contained storylines featuring unforgettable characters. But if you miss or skip some these missions during your journey only to realize that you greatly outlevel them later on, don’t worry—the entire universe can be scaled up to match your current level while Mayhem Mode is active, ensuring that all missions provide a suitable challenge. If you really want to test your mettle, you should also revisit any Proving Grounds and Circle of Slaughter arenas you’ve discovered with Mayhem Mode enabled. Mayhem Mode is unlocked once you’ve finished all the main story missions; check out our PAX West reveals to learn more.

There’s plenty more to discover for yourself in Borderlands 3, but these tips should help give you an edge in the battle against the Children of the Vault. For more need-to-know info ahead of Borderlands 3’s launch on September 13.