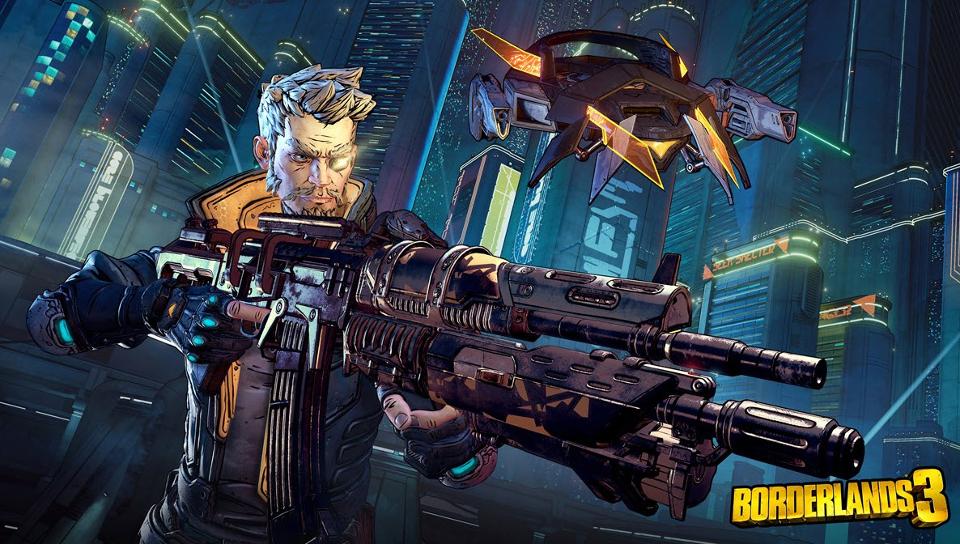 You missed it? You missed the Borderlands 3 gameplay reveal?! It was MAYHEM!

See the first ever Borderlands 3 gameplay as well as commentary from the Gearbox development team on everything from the new Vault Hunters to interplanetary travel and sweet, sweet loot.

In front of a loot-thirsty audience, Gearbox President and CEO Randy Pitchford and Borderlands 3 Creative Director Paul Sage gave the first ever live stage demo of Borderlands 3 gameplay. Claptrap was there to greet them as them as they arrived on Pandora—the planet where both Borderlands and Borderlands 2 were set—and as they navigated some of the game’s early missions and obstacles, the audience got to see the Vault Hunters’ new slide and mantle moves in action. Unsurprisingly, it wasn’t long before they got their first look at Borderlands 3 gunplay as well.

Bandits aplenty were sacrificed at the hands of Amara the Siren so that the audience could see Borderlands 3 guns and their new multiple firing modes in action. Then, some shooting, some looting, and one mini-boss later, the demo jumped ahead to the cult’s Holy Recruitment Center—a well-defended structure from which a powerful bandit boss named Mouthpiece broadcasts Children of the Vault propaganda. Mouthpiece had to be stopped, so Randy and Paul decided to add a second Vault Hunter to the mix in the form of a higher-level Zane the Operative.

Because Borderlands 3 incorporates multiplayer level-balancing, the disparity in levels between the two Vault Hunters wasn’t a problem; both were able to deal meaningful damage and, because the optional loot-instancing feature was enabled, both received their own level-appropriate loot. The two Vault Hunters have different play styles of course, and since Zane already had access to his action skills (yes, plural) they were brought to bear against Mouthpiece and his minions in a boss fight that memorably marked the end of the demo’s time on Pandora.

After taking off from Pandora aboard the spaceship Sanctuary 3 and setting course for Promethea, the Vault Hunters spent some time touring the vessel and checking in with familiar faces like Ellie, Marcus, and Moxxi. Upon arrival at the planet of Promethea, previously seen only briefly in trailers, the Maliwan mechanized infantry patrolling the futuristic metropolis ensured that there was no shortage of shooting and looting as the Vault Hunters explored the unfamiliar surroundings. Greatly outnumbered by the relentless Maliwan forces at every turn, the Vault Hunters were expending action skills and ammo aplenty when they got an unexpected assist from Borderlands 2 Vault Hunter Zer0, the mysterious sword-wielding assassin.

The demo ended on that high note, and attendees at the event in Los Angeles, many of whom were content creators and streamers, were then invited to play Borderlands 3 themselves. They’ve shared all kinds of great content based on their time with Borderlands 3 in the hours since the event, so if you haven’t already, be sure to check it out and don’t forget to like, follow, and obey.