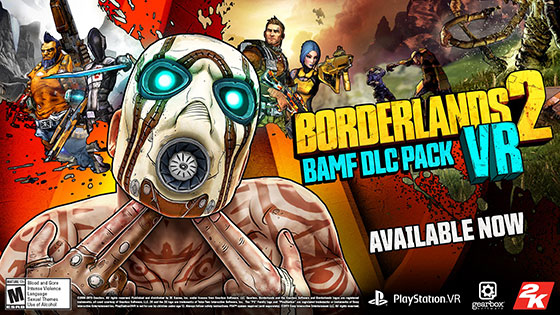 The big headliners in the BAMF DLC Pack are the two additional Vault Hunter classes and the four campaigns added to the base game. Gaige the Mechromancer and Krieg the Psycho are perfectly suited to VR: now you can high-five your Deathtrap robot companion as Gaige and really feel the impact of your up-close-and-personal melee strikes as Krieg. Meanwhile, the four massive campaigns you get in the BAMF DLC Pack all offer a host of new environments, quests, gear, guns, enemies, bosses, and so much more. Embark on a swashbuckling adventure as you search for hidden treasure buried beneath desert sands in Captain Scarlett and Her Pirate’s Booty. Prove your badassitude in a gladiatorial tournament full of copious explosions in Mr. Torgue’s Campaign of Carnage. Travel to the savage continent of Aegrus for a safari rife with exotic creatures in Sir Hammerlock’s Big Game Hunt. And make your wildest, most ridiculous tabletop fantasies come true in Tiny Tina’s Assault on Dragon Keep.

You also get all five Headhunter DLCs—T.K. Baha’s Blood Harvest, The Horrible Hunger of the Ravenous Wattle Gobbler, How Marcus Saved Mercenary Day, Mad Moxxi and the Wedding Day Massacre, and Sir Hammerlock vs. the Son of Crawmerax—plus the Creature Slaughter Dome, along with the additional goodies and increased level cap introduced in the Ultimate Vault Hunter Upgrade Packs. Rounding out the BAMF DLC Pack are the spiffy cosmetics of the Vault Hunter Heads and Skin packs so your virtual Vault Hunter can look their best.

The BAMF DLC Pack is available now as a free addition to Borderlands 2 VR on PlayStation®VR, so go download it, dive in headfirst, and don’t forget to occasionally come up for air.